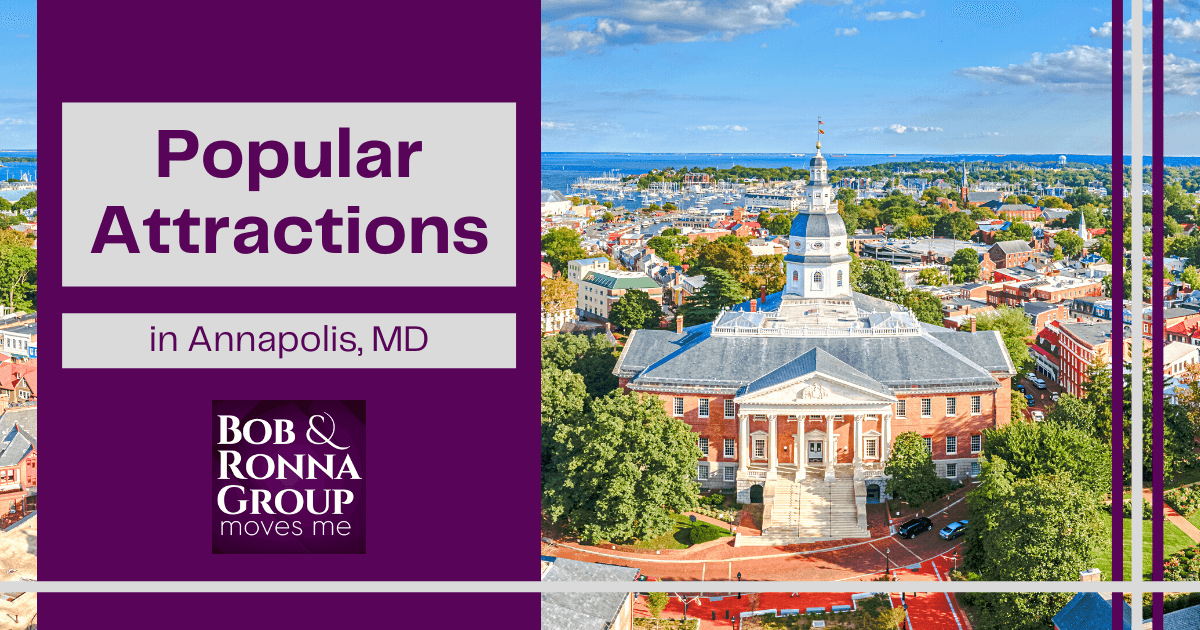 A short drive south of Baltimore, the Annapolis community is a beautiful city set on the shores of the Chesapeake Bay. The city is fondly nicknamed the Sailing Capital of the World for the hundreds of sailboats, yachts, and other water vessels that sail and parade its waterways every day.

But beyond being a sailor's haven, there are many historically significant attractions and fun things to do in Annapolis. The city's rich history is evident in the numerous 18th-century brick homes, cobblestone streets, time-honored monuments, museums, and historic centers found throughout the city. Keep reading to learn about the many popular attractions in Annapolis.

The U.S. Naval Academy is a 338-acre military training campus at the confluence of the Chesapeake Bay and the Severn River. It was established by George Bancroft, 17th Secretary of the Navy and educator, to improve the unsatisfactory coaching strategies for midshipmen and has been successfully training men and women for the U.S. Navy since 1845.

But it's not just a military academy; it's also a place to take a walk down the country's longstanding naval traditions and experience firsthand what life is like for midshipmen. Even though U.S. Naval Academy visitors are free to take self-guided tours of the campus. Public or private guided tours are an opportunity to learn about the history and traditions of the academy and the fascinating Beaux-Arts Architecture typical of the academy's structures.

If you chose a self-guided tour, start at the Armel- Leftwitch Visitors Centre for midshipmen exhibits, check out the massive, recently-renovated chapel, and stop by the Crypt of John Paul Jones, one of the most famous naval commanders in the revolutionary war.

If you happen to be in the academy's well-manicured grounds around noon, immediately head to Tecumseh Court for the noon meal formation. The formation is an impressive tradition during which thousands of midshipmen uniformly match into the court and stand at attention in their stark white attire.

Other must-see attractions at the U.S. Naval Academy include the USNA museum, the Marine Corps memorial stadium, and monuments. Guided tours start at $12 for adults, $11 for seniors, and $10 for kids. The academy opens every day from 9:00 a.m. to 5:00 p.m., and identification is required for anyone 18 or older.

The beautiful wooden-domed Maryland State House is one of the most popular attractions in Annapolis. Besides being visually pleasing, its unique wooden-dome roof also happens to be the largest wooden dome built without nails in the country.

The statehouse was completed in 1779 and is the country's oldest state capitol in legislative use today. It's also the only statehouse in the country to have served as the official capital and, as such, boasts a good share of America's most memorable historical moments. For instance, at Maryland's State House Old Senate Chamber, George Washington, America's founding father, handed his resignation from the continental army leading to the end of the revolutionary war. Famous statues, including one of Harriet Tubman, are also found here.

Today, the statehouse is the legislative seat of Maryland's General Assembly and is often open for the public daily from 8:30 a.m. to 5:00 p.m., except on Christmas and New Year's. The facility offers free appointment-based group tours, but those who prefer solo exploration are encouraged to stop by the Office of Interpretation for self-guided tour resources. Carry identification as it'll be required at the entrance.

The best way to learn about Annapolis' rich maritime history and explore its heritage is by visiting the waterfront maritime museum. The historic landmark overlooks the Bay in Eastport and is adjacent to the only-remaining oyster-packing plant in the Annapolis area.

A tour of the facility takes visitors through exhibits, artifact collections, and documents that showcase the history of boat building in Annapolis and how the oyster industry helped shape the city's culture and economy. There's an 850-gallon aquarium where visitors can learn about an oyster's reef ecosystem and why it's important, and exhibits such as Miss Lonesome, an oyster boat with open sections revealing the inner components of these historically-significant water vessels.

Make sure to check out the Thomas Point Shoal Lighthouse, the only remaining screw-pile lighthouse along the bay. Check out Wilma Lee as well — it's the museum's latest addition and one of the few remaining skipjacks on the Chesapeake Bay.

For an even more immersive experience, consider public or private group tours of the lighthouse, the Wilma Lee, and other tours led by trained professionals at the Maritime Museum at special rates. The Annapolis Maritime opens to the public daily except on holidays at $5 per person for groups of 10-15 people. However, tours are subject to availability, so consider booking in advance.

A cruise along the Chesapeake Bay is one of the best ways to take in the bay's magical vistas and explore the city's historic waterfront. A private or public cruise on the Chesapeake Bay offers unobstructed views of Annapolis towering skyscrapers and scenic skyline, the United States Naval Academy, the Annapolis Harbor, and even the Severn River.

And the best part is that several companies offer sailing excursions along the bay. Schooner Wood Wind is one such company. They offer half to full-day private and public cruises on a 74-foot schooner. Cruises on the schooner are available for up to 40 guests and offer clients use of the vessel with assistance from the Wood Wind team.

Private cruises cost $1,295.03 for groups of up to 16 guests on weekdays and $1,368.84 on weekends, sunsets, and holidays. Public cruises aboard the schooner last two hours and include a soft drink and service fees. With so many fun things to do on the Chesapeake Bay, a sailing excursion is a great place to start.

The Annapolis Historic District is a must-see attraction in Annapolis. It's essentially an open-air museum featuring some of the city's most coveted historical landmarks, such as the William Paca House and Garden, an 18th-century Georgian-style mansion and home to one of Maryland's former governors.

The house was renovated to restore its colonial glory and is the best way to immerse yourself in the extravagant lifestyles of the rich in the 18th century. Guided tours of the house occur from 10:00 a.m. to 5:00 p.m. Monday through Saturday and from noon till 5:00 p.m. on Sunday. Main Street, a five-block street lined with dozens of shops, restaurants, bars, and art galleries housed in well-maintained 18th and 19th-century buildings, is also a must-see attraction in this historic district.

Even better, the street has everything visitors might need, from dining to nightlife options, meaning you can start your tour at other attractions and end the day relaxing and exploring it. Other notable attractions include St. Anne's church, the first church ever in Annapolis, and the Maryland State House.

Annapolis is the best place to learn about the history of Maryland and even the country. This charming city boasts the highest amount of 18th-century architecture and is the only statehouse in the country that served as the capital. Annapolis even has an entire historic district with enough attractions to keep history buffs engaged the entire day.

Even better, this city has vibrant nightlife, endless water recreation opportunities, and a range of neighborhoods with different housing options, including condos and townhomes. See for yourself why these attractions keep people moving to Annapolis in droves back year after year.