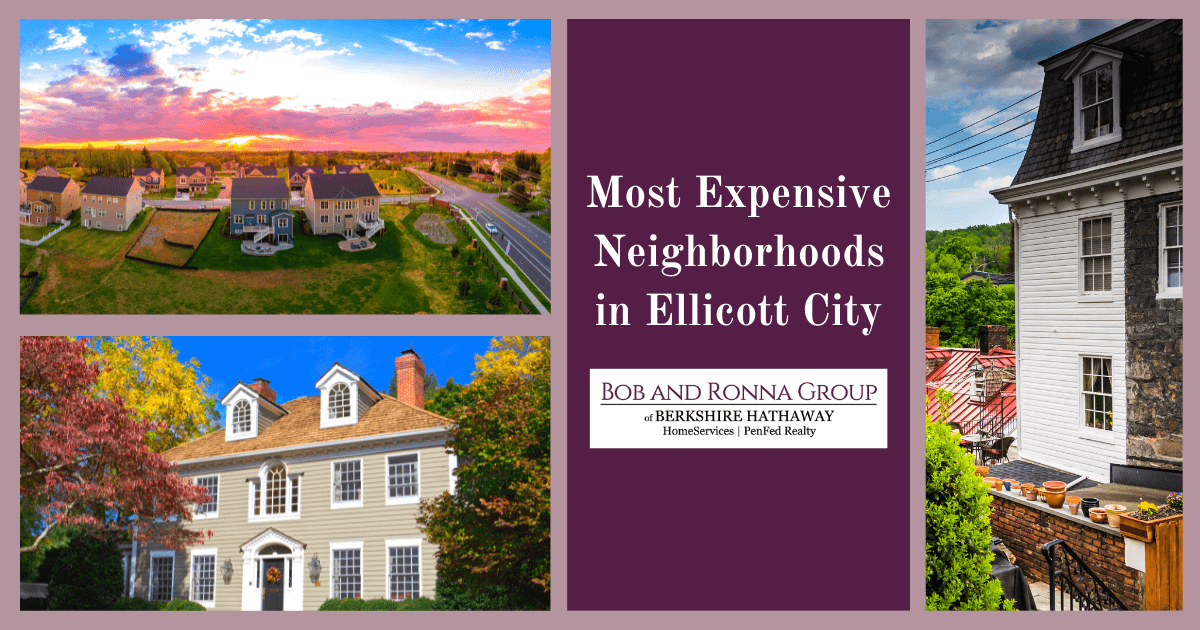 Ellicott City is a community in Howard County, Maryland, and part of the Baltimore metropolitan area. It is also only about 37 miles from Washington, D.C. Nestled against the Patapsco River, the city was originally known as "Ellicott's Upper Mills" because Joesph Ellicott and his brothers constructed sawmills, oak mills, grain mills, and distilleries in the area in the late 1700s. The town retained the name "Ellicott's Mills" until 1867 when it was changed to Ellicott City.

Today, Ellicott City is a thriving community of more than 65,000 people. The robust real estate market includes a broad selection of stunning luxury homes. These spacious estates can include desirable amenities like private swimming pools and on-site golf courses. Read on to learn about the most expensive neighborhoods in Ellicott City.

The Patuxent Chase neighborhood has 82 single-family detached houses, most of them on one-acre lots. Access to the neighborhood is by turning from Clarksville Pike (Route 108) onto Valley View Overlook. Patuxent Chase development began in 2006, and most homes were completed by 2008.

The homes here are large, featuring four to five bedrooms and more than 4,000 square feet of living space. Buyers can find luxury features, such as high-quailty kitchen appliances, custom millwork, and 10-foot ceilings. Two-, three-, and four-car garages are typical. Home prices in this neighborhood typically range from $1.2 million to $1.75 million.

The neighborhood is completely residential, and there are no commercial areas within the boundaries. However, commercial development can be found just on the other side of Route 108. Restaurants include the Turn House, located within Hobbit's Glen Golf Club, and the Iron Bridge Wine Co. The River Hill Village Center is about four minutes away on Route 108. The center includes a grocery store, banks, a hair salon, cleaners, an optical center, and various restaurants.

With dreamy scenery that's on par with any of the best neighborhoods in Ellicott City, this community was built in the early 2000s on a parcel of Cider Mill Farm. The farm was established in 1916 when Frederick Kelly planted 5,000 apple trees in the area. When the trees matured, Kelly founded a cider mill there. The farm and mill closed in 1969 and was bought by Tom Owens, who operated it as a local attraction until he sold it to developers in 2002.

The Cider Mill neighborhood features single-family detached homes in various styles, ranging from about 3,000 square feet to more than 7,000 square feet. Homes prices typically start at $775,000 and can go upwards to $1.2 million.

The neighborhood is residential. However, commercial development is nearby along Highway 100. One example is a franchise of the chain restaurant Eggspectation, which serves breakfast, burgers, pasta, and meat entrees. Another is Xenia, which serves Greek food.

The Westmount community is an enclave of homes on tree-lined streets, off Route 144 and near I-70 and Routes 29 and 40. This neighborhood offers new construction homes in Ellicott City.

Home prices in Westmount vary between $890,000 and $1.1 million. The homes can range in size from 3,531 square feet to more than 6,000 square feet. Some floor plans in the neighborhood have up to five bedrooms and six bathrooms. The homes also feature quartz countertops in the kitchen, pendant lighting, and designer cabinetry.

Restaurants, shops, and nightlife are all nearby. Alexandra's Restaurant at the Turf Valley Resort serves breakfast, lunch, dinner, and Sunday brunch. Pachanga Cocina Mexican restaurant is a casual eatery on Route 40. The neighborhood also is near shops and restaurants at the Enchanted Forest Shopping Center.

Turf Valley is a resort-style community with Ellicott City golf course homes. It's located south of I-70 and east of Baltimore National Pike (Route 40). The David Force Natural Resource Area is along its northern border. The neighborhood features two eighteen-hole golf courses and lots of green space. The Turf Valley Resort also includes tennis, swimming, fitness, and a spa.

Most homes were built between 2014 and 2017. A variety of house types are available, including single-family detached homes and attached homes (such as townhomes and condos.) Sizes range from about 3,000 square feet to 4,300 square feet. Prices can be found between $750,000 and $1 million.

A few restaurants are located within the subdivision, including Alexandra's American fusion restaurant and Grill 620, a chophouse that offers a fine selection of wines, scotch, and bourbon. Grill 620 is located in the Turf Valley Towne Square, which offers other restaurants, a supermarket, cleaners, banks, and other shops.

Ellicott City provides various options for those who want large and luxurious homes while being close to Baltimore and Washington, D.C. Buyers can choose from various lifestyles, including quiet enclaves or resort communities with luxe amenities. Anyone moving to Ellicott City to experience a top-of-the-line lifestyle will be delighted by the neighborhoods on this list.