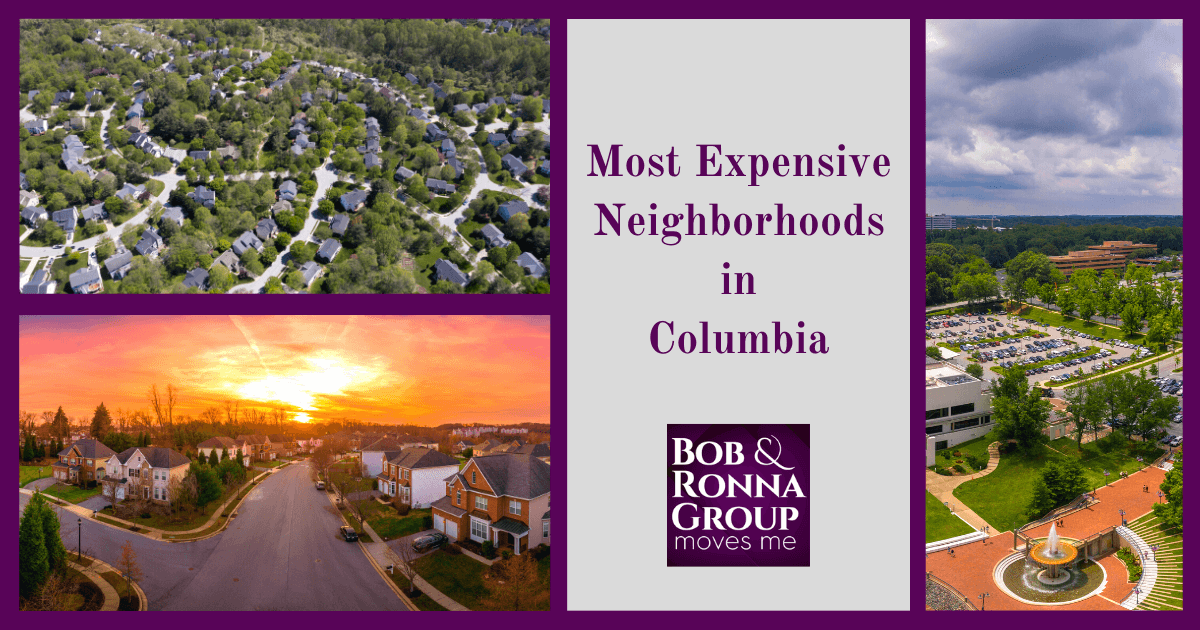 In recent years, Columbia, Maryland, has become an increasingly popular city for prospective homeowners to reside in. Nestled in the heart of the Mid-Atlantic region, Columbia real estate is centrally located in the Baltimore-Washington metropolitan area. It is a short distance from Washington, D.C, the city of Baltimore, and the Annapolis community.

With over 108,000 residents, it's a vibrant small city with so much to offer people moving to Columbia. For anyone interested in Columbia luxury homes, the city's top-tier neighborhoods are sure to deliver. Keep reading to learn about the five most expensive neighborhoods in Columbia.

Located ten minutes from Downtown Columbia, the village of River Hill is considered the westernmost village in the city of Columbia. It is considered Columbia's newest and final village and comprises two residential neighborhoods: Pheasant Ridge and Pointers Run. With a history dating back to the 18th century, River Hill was originally the site of a game farm before it was established as a village in 1990. Today, River Hill is an idyllic village with charming shops and plenty of green spaces. With a combined population of just over 6,500 residents, River Hill is an incredibly close, tight-knit community within Columbia.

For residents, one of the biggest draws of living in River Hill is its abundance of local shops and restaurants for residents to enjoy. Home to the River Village Shopping Center, the shopping center has three shops and six restaurants. Some of the most popular restaurants in the River Village Shopping Center include River Hill Grille, Bagel Bin & Deli, and Ledo Pizza. Another trendy restaurant in River Hill is Bushel and a Peck Kitchen and Bar. For residents interested in moving to this charming neighborhood, River Hill real estate options include townhomes and single-family houses, with home prices ranging from $675,000 to $1,400,000.

Located southeast of Downtown Columbia, Owen Brown was founded in 1972 and was the fifth village to be developed in Columbia. Before its founding, Columbia had a prominent street named Owen Brown Road, the local postmaster and business owner who once worked in the area. Because the road ran through the village's current location, Owen Brown was meant to be a temporary name for the area, but the name stuck, which is why it still bears the name today. Like River Hill, Owen Brown contains neighborhoods within the village: Dasher Green, Elkhorn, and Hopewell.

Located just five minutes from the city of Columbia, Owen Brown is one of the closest villages to the downtown area. Residents will find plenty of shopping and fine dining options. Some of the most popular restaurants include Sonoma's Bar & Grille, Boro Kabob, and Anegada Delights Caribbean Cuisine. Real estate in Owen Brown includes single-family homes, condos, and townhouses. While home prices vary based on home style and size, real estate prices in the Owen Brown neighborhood start at around $575,000 and go up from there.

Located ten minutes north of Downtown Columbia, Thunder Hill is one of ten villages within the city of Columbia. With a population of just over 2,400 residents, it is also one of the quietest neighborhoods in the city. Thunder Hill is known for two notable features: its stately charm and its convenient location. Thunder Hill is a quaint, highly walkable neighborhood with tree-lined streets adorned with stately homes. Along with its peaceful charms, it is conveniently located near some of Columbia's biggest attractions.

Golf enthusiasts are just a short drive away from some of Columbia's best courses, including Fairway Hills Golf Club and The Timbers at Troy. Among other recreational activities, Thunder Hill is also home to one of Columbia's biggest laser tag hotspots: Shadowland Laser Adventures. Thunder Hill is an ideal neighborhood for residents who are more interested in fine dining and drinking. Sapwood Cellars, an artisanal brewery, is one of the most popular hotspots for Thunder Hill residents. Some of the neighborhood's most popular restaurants for fine dining include Tino's Italian Bistro, The Periodic Table Restaurant and Bar, and the 5485 Restaurant and Bar.

Thunder Hill primarily offers single-family homes for prospective residents, with split-level and two-story homes as the most popular style. Thunder Hill homes for sale typically range from $425,000 to $550,000.

Located southeast of Downtown Columbia, Guilford sits on the border between Columbia and the city of Savage in Howard County. With a history dating back to the 18th century, Guilford is one of the earliest towns present in the Columbia area. While Guilford was established in 1974, it officially became one of Columbia's ten villages in 1966. Like many of Columbia's villages, Guilford is an idyllic neighborhood with distinctive charms. It still has its historic post office, which was initially built in 1876, where it functioned as the town's post office until 1920.

Along with its historic appeal, Guilford is home to many attractions, including two microbreweries: Black Flag Brewing Company and Hysteria Brewing Company. These breweries are local favorites for Guilford residents, giving the small neighborhood a more lively feel. Guilford has a variety of shopping and fine dining options. Some of the most popular cuisine options include American, Indian, Italian, Chinese, and Thai. While there are many beautiful restaurants in the neighborhood, Bertucci's Italian Restaurant, Bi Bi Cafeteria, Cazbar - Columbia, and Hunan Manor are some of the best. For residents considering buying Guilford homes for sale, some of the most popular home styles are condos, townhouses, and single-family homes. Home prices in this neighborhood range from $470,000 to $625,000.

Bordering Downtown Columbia to the west and River Hills to the east, Hickory Ridge is one of the largest villages in Columbia. Founded in 1973, the Hickory Ridge village has three distinctive neighborhoods within its borders: Hawthorn, Clemens Crossing, and Clary's Forest. With a combined population of around 13,000 residents, Hickory Ridge is the second largest village in Columbia. For residents, there is plenty of shopping and fine dining options. Hickory Ridge Shopping Village offers a variety of stores for every type of shopper. Some of the most popular restaurants are Koto Sake Japanese Steak House, Cured 18th & 21st, and Grilled Chick'n Pollo when it comes to dining.

For buyers interested in purchasing in this area, there are various many desirable Hickory Ridge real estate options, including condos, townhouses, and single-family homes, with prices ranging from $230,000 to $535,000.

As the Washington-Baltimore metropolitan area grows, more and more residents are searching for homes in smaller communities. Not only is Columbia, Maryland, close to some of the largest cities in the Mid-Atlantic region, but Columbia is also a vibrant city in its own right, with an unmatched personality and excellent jobs from the thriving Columbia economy. Explore these desirable communities and uncover the home of your dreams.