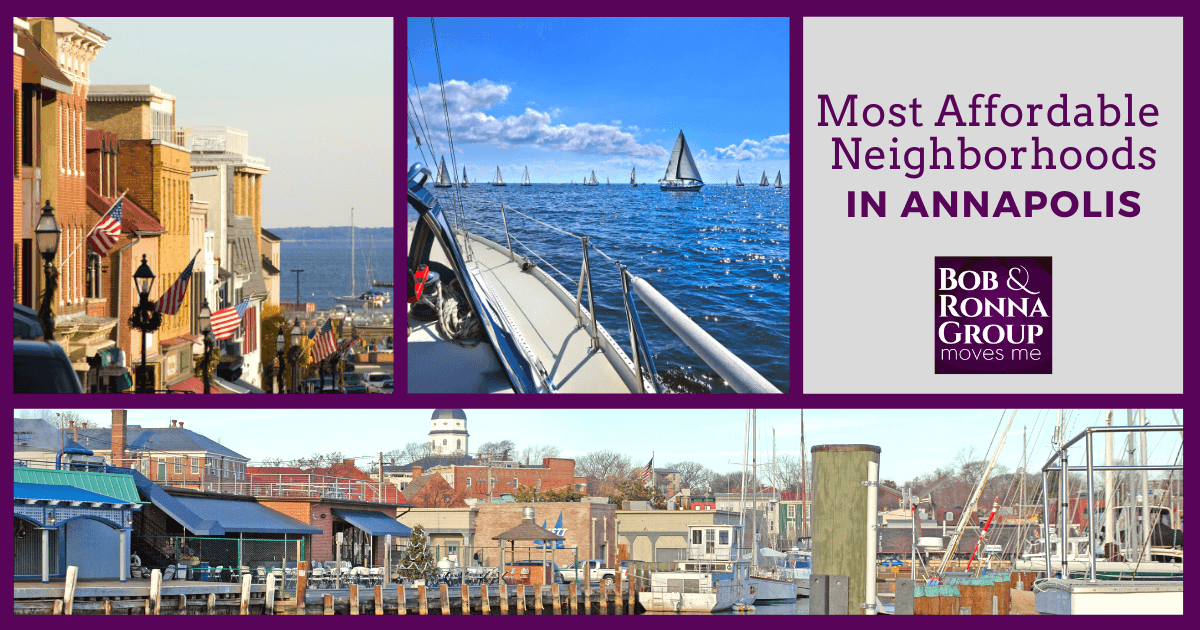 Nestled against the Chesapeake Bay and the Severn River, Annapolis, Maryland, serves as the capital of the state of Maryland and as the county seat of Anne Arundel County. Home to St. John's College and close to the U.S. Naval Academy, Annapolis has played a prominent role in the history of the U.S. military.

Annapolis real estate is known for desirable homes in charming communities near the water. This all ties into the region's maritime and nautical heritage, which has led to some people calling Annapolis "The Sailing Capital of the World." Enjoying the benefits of a waterfront lifestyle in the neighborhoods of Annapolis doesn't require an extra-large budget. Keep reading to learn about the eight most affordable neighborhoods in Annapolis.

In addition to its many beautiful homes, Arundel-on-the-Bay has a variety of neighborhood hotspots, including restaurants, shopping, and more. Restaurants include Jack's Fortune Restaurant, offering Asian favorites; Main & Market, known for its distinct charm and fresh food; and Caliente Grill, serving Latino cuisine.

For residents who like the outdoors, Arundel-on-the-Bay has a private beach. The community is also on the opposite shore from Thomas Point Park, which has bay and river fishing, walking trails, and plenty of green space.

The community of Oyster Harbor is found on the Annapolis Neck peninsula. The Oyster Harbor neighborhood offers impressive views of the nearby Chesapeake Bay from many more than 400 homes. Architecturally, the community has a wide selection of different-styled homes, including beach bungalows and homes on pilings to avoid the tide.

In addition to its private beach area, the neighborhood offers a variety of homes, ranging in price from $305,000 to $1.15 million. Home sizes start with as little as 740 square feet to homes with almost 10,000 square feet. In addition, homes in the area have anywhere between two beds and one bath to five beds and five baths. Oyster Harbor invites buyers to enjoy the upscale perks found in Annapolis luxury homes without spending quite as much.

Area hotspots include Taqueria Juquilita, a Mexican restaurant that serves tacos, burritos, and other fares; Grapes Wine Bar of Annapolis, offering a variety of fine wines and food items; and Great Frogs Winery, with a selection of artisan wines.

Founded in 1893 by the youngest son of Frederick Douglass, the small community of Highland Beach has played a big part in the surrounding region's history. The Highland Beach community was once a top vacation destination but now is home to many full-time residents.

Most of the hotspots near Highland Beach are closer to Annapolis to the north. Some area hotspots in Highland Beach include Eastport Kitchen, with menu items made from seasonal and local products; Davis' Pub, serving good, affordable food; and Wild Country Seafood, located behind the Annapolis Maritime Museum, bringing the old crab shack to feel to the Annapolis area.

The small community of Revell Downs is located in the northeast part of the city of Annapolis. The Revell Downs neighborhood is characterized by cozy homes in an urban setting close to Blue Star Memorial Highway. This gives residents of the community easy access to the rest of Annapolis, the Chesapeake Bay Bridge, and beyond.

Homes within the Revell Downs neighborhood range in price from $250,000 to $665,000. Floor plans include a variety of styles, with the number of bedrooms starting at one bedroom and one bath, going up to seven bedrooms and three baths. Square footage wise, homes are between 1,500 and 2,400 square feet.

Nearby bars include The Brass Tap, with over 150 craft beers worldwide; Galway Bay Restaurant and Pub, an Annapolis tradition since 1998; and the Trophy Room, serving hot bites and a variety of cocktails. The Bean Rush Café is an area café that serves coffees, teas, and delicious café food.

Houses in the Hillsmere Shores community cost anywhere between $177,000 and $2.1 million. Home sizes in the neighborhood range between 770 to 4,500 square feet, with dwellings having between one and seven bedrooms.

In addition to their private beach access, the residents of Hillsmere Shores have access to many local amenities. Some of these amenities include the many great area restaurants, such as Rocco's Pizzeria, serving New York-style pizza; Miss Shirley's Café, serving breakfast, brunch, and lunch; and El Catracho Food, which has a variety of Honduran cuisine.

Great Frogs Winery is a family-owned winery that works hard to bring the best wines to its clientele. Other area wineries and breweries include Cooper Hawk's Winery & Restaurant, Gordon Biersch Brewery Restaurant, and Forward Brewing.

Home sizes range from one to five beds. The houses lay along the main thoroughfare and on the community's side streets. Prices for homes in Whispering Woods start at around $185,000 and go up to $720,000. Square footage for homes in the neighborhood falls between 1,000 and 4,200 square feet.

Eateries close to the Whispering Woods community include The Point Crab House & Grill, offering a casual dining experience with locally sourced dishes; O'Loughlin's Restaurant & Pub, an area landmark in operation since 1986; and the River Bay Roadhouse, with a menu full of burgers, salads, and fresh seafood.

Nearby parks include Broadneck Park to the east, which features multipurpose fields, a pavilion, and its dog park; Arnold Park, which has a playground, picnic area, sports facilities; and the Governor Ritchie Scenic Overlook, located in the Maryland World War II Memorial.

Filled with attractive Annapolis townhomes for sale, the community of Mariner's Point lies near Black Creek. The Mariner's Point neighborhood boasts community perks like a clubhouse, pool, and large wooded common area for use by the residents. The community also extends to the other side of Edgewood Road, to Mariner's Landing, which has additional housing units.

Local establishments frequented by Mariner's Point residents include Blackwater Hitch, featuring a variety of rustic dishes with bold flavors; Leeward Market Café & Grocery, offering a variety of menu items, some with a Greek flare; and Adam's Taphouse and Grille, serving ribs and other barbecue favorites since 1981.

Houses in the Cape St. Claire neighborhood range from about $108,000 to $2.6 million. Home sizes start at about 1,400 square feet and go up to over 7,100 square feet. Residences in the community include many waterfront homes and a mixture of one- and two-story houses.

Other nearby locations include Rise Up, a coffee joint featuring locally roasted coffees and a laid-back attitude; Severna Park Taphouse, specializing in craft beer; and Green Valley Marketplace, a market that has been in the area for over 100 years.

In addition, as a part of the Washington-Baltimore metropolitan area, Annapolis gives residents quick access to the surrounding Anne Arundel County area, including the many available employment opportunities, things to do, and other activities. At the same time, the Annapolis area can provide a refuge from the rigors of the larger cities surrounding it.